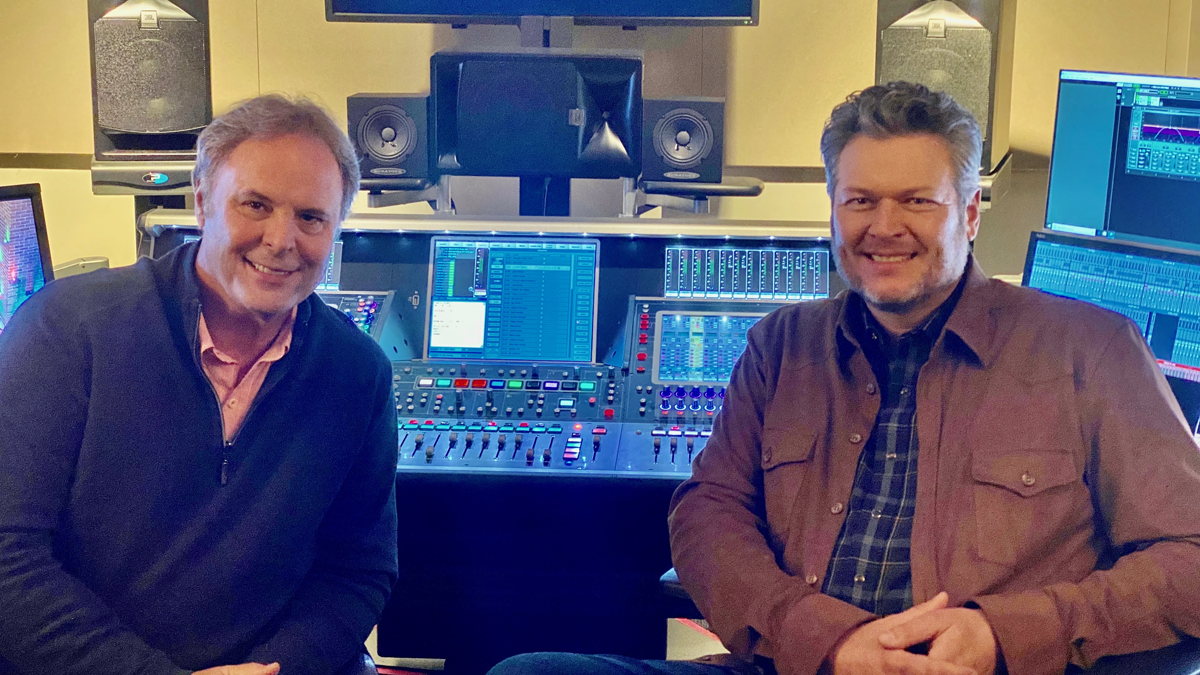 Music Credit Technology and Campaigns are Emerging in the Mainstream

For too long, the contributions of musicians, producers and engineers to musical tracks have not received full visibility in the digital age. Unlike the era of LP and CD liner notes, digital streaming has not included comprehensive documentation for those who contribute to a track.

But Warner Music Nashville artist Blake Shelton, who recently received a GRAMMY® nomination for his track “God's Country”, has pushed forward in the movement to give credit where credit is due. In support of the Recording Academy®’s groundbreaking Behind The Record campaign, a social media initiative that launched in October to spotlight all professional music creators who contribute to the music recording process, Blake posted:

The power of song is unbelievable and this year, #GodsCountry has been just that for me. Honored to work with some incredible creators and friends on this one. Join me in celebrating and #GiveCredit to all those who work #BehindTheRecord. It’s been a damn good year. #WeAreMusic @RecordingAcademy 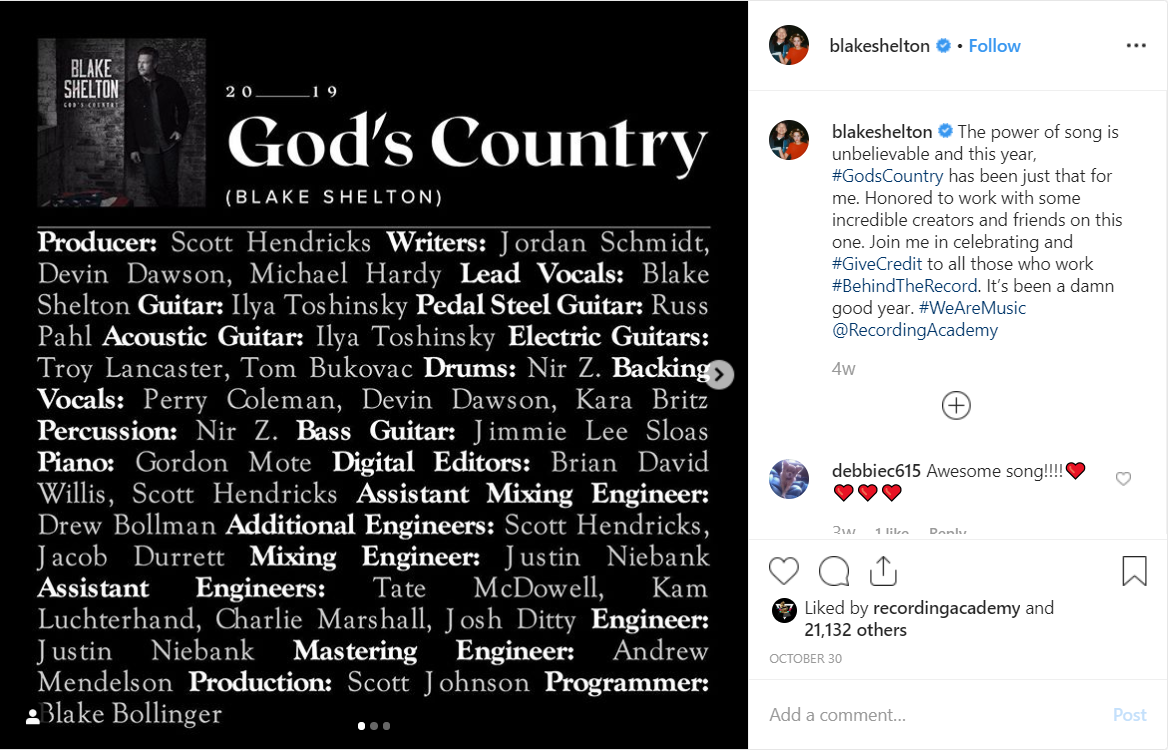 The accompanying image from the Recording Academy’s Behind The Record initiative, that Blake posted on Instagram, listed a dozen musicians, a dozen engineers, and all producers and writers who had participated in making the track. Shelton's shout out to his collaborators was proof positive that practical steps are being taken to streamline the music credit process in the digital age. And Warner Music Nashville, pioneering the use of cutting-edge technology, like Sound Credit, is guiding those steps.

Sound Credit, a Memphis-based tech company, is poised to revolutionize the collection of credits and information in the studio. At the Creator Credits Summit held in Stockholm, Sweden this November, Sound Credit celebrated milestones decades in the making for music industry credits. This includes breakthrough integrations that help improve the payment of royalties. Also, the platform is now available at no cost to all Avid® Pro Tools® and Pro Tools|Ultimate subscribers as part of Avid’s Loyalty Rewards program.

Because of its ease-of-use and reliability, Sound Credit has propelled a sea change in credit-delivery across multiple musical formats. And Blake Shelton's “God's Country” is a flagship release showing just how easily the process can work. Information gathered during the recording of “God's Country” using Sound Credit was delivered to Warner Music Nashville in a standardized digital format called Recording Information Notification (RIN). From there, the credits were ultimately delivered to streaming platforms, like Pandora and others, who have also made a commitment to credits.

In this way, Warner Music Nashville is creating momentum with other industry organizations to make song credits a priority across all platforms. As the Pandora blog noted just last month:

We believe in giving credit where it’s due. That’s why we’re excited to announce that Pandora now displays full song credits for millions of tracks in our massive music library, highlighting all of the people – both in front of the mic and behind-the-scenes – who played a role in the creation of your favorite tunes. Starting today, full song credits are accessible to Pandora users across all tiers of service on the web at Pandora.com and on Pandora’s new desktop apps for Mac and Windows.

Standardized music credits have now been delivered directly from the production process to major labels. As such, it marks a milestone of creative data traveling from the recording studio to consumers of that studio's output: essentially an end-to-end delivery for digital music credits. Thanks to efforts among companies and organizations across the music industry, forward-thinking labels like Warner Music Nashville, and visionary artist-legends like Blake Shelton, digital credits can become ubiquitous across all formats.

Sound Credit is a Memphis-based corporation that develops breakthrough technology for the music industry. The company is dedicated to revolutionizing the supply chain of sound recordings from the studio through to the listener. Sound Credit has achieved users in over 50 countries with recognition throughout the music industry.

Country Music Association’s 2019 Single Of The Year winner and GRAMMY nominee Blake Shelton continues to add to his superstar status. The award winning “God’s Country” became his 26th No. 1 on country radio, were it remained for a multi-week run, in addition to marking his 16th No. 1 on the Billboard Hot Country Songs chart and the fastest country single in the past year to reach one million track equivalents. His newest single “Hell Right” featuring Trace Adkins and penned by David Garcia, Brett Tyler and Michael Hardy, is Top 15 and climbing Today he released both songs as well as new music and previous hits on his album Fully Loaded: God’s Country. Shelton has also teamed up with the legendary Garth Brooks for rapidly climbing single “Dive Bar,” which earned the highest chart debut in seven years.

A member of the Grand Ole Opry, the Platinum-selling entertainer has earned a host of honors throughout his career including CMA Entertainer Of The Year and five consecutive wins for Male Vocalist Of The Year. As a coach for the Emmy Award-winning television show The Voice, Shelton is a six-time champion, most recently with his contestant Chloe Kohanski. The Grand Ole Opry member also remains focused on his Ole Red partnership with Ryman Hospitality. The newest addition to the collection of restaurant and entertainment venues will open in Orlando next year and joins locations in Tishomingo, Nashville and Gatlinburg.

Warner Music Nashville was created in 2009 under the leadership of Chairman & CEO John Esposito. It continues to champion Warner Music Group’s presence in the Nashville music community its family of labels have called home for more than 60 years.